This note briefly describes what inflation is and how it is measured.  It discusses the recent sharp increases in inflation in Canada, which has brought hardship to many Canadians, particularly First Nations.

Inflation adjustments do not replace program funding that is adequate for the needs of a First Nation.  If a program area is underfunded relative to need, it will remain insufficient even with an inflation adjustment.

There are two approaches proposed in this note to adjust program funding for First Nations to better reflect contextual realities and higher costs of living experienced in many communities.  The inflation adjustment would be added to both approaches, to smooth price differences once funding adequacy relative to context is ensured.

Consumer price inflation is defined as the change in the Consumer Price Index (CPI) over time.  Statistics Canada describes the CPI as follows:

“The Consumer Price Index represents changes in prices as experienced by Canadian consumers. It measures price changes by comparing, through time, the cost of a fixed basket of goods and services.”

The fixed basket of goods and services is selected based on 700 product classes.  The products are selected based on what consumers normally purchase. They include necessities, luxuries, and products such as tobacco and alcoholic beverages. Every month prices of a sample of goods and services in each product class are surveyed through various methods to measure the value of the CPI for that month.  The prices are what consumers pay including discounts and all the taxes.  The observed prices are then weighted based on their importance

It is important to note that the CPI is not a measure of the cost of living for every household or individual.  It is the cost of a fixed basket of goods and services. The CPI may overestimate or underestimate the cost for a specific consumer buying a different basket of goods. Moreover, the CPI does not represent purchases made in First Nations reserves, military bases, prisons, and long-term care institutions, as it is based on consumption information from the majority of the Canadian population residing outside of these places.

It is also important to keep in mind the difference between the price level and the rate of inflation:

On July 20, 2022, Statistics Canada released the CPI for June 2022, which is 8.1 percent higher than its value the previous year (June 2021).  Table 1 presents the inflation rate for all-items in the CPI and some of its subcategories. The significant increases in prices of energy, especially gasoline, transportation, and food are the main contributors to the June inflation rate of 8.1 percent. 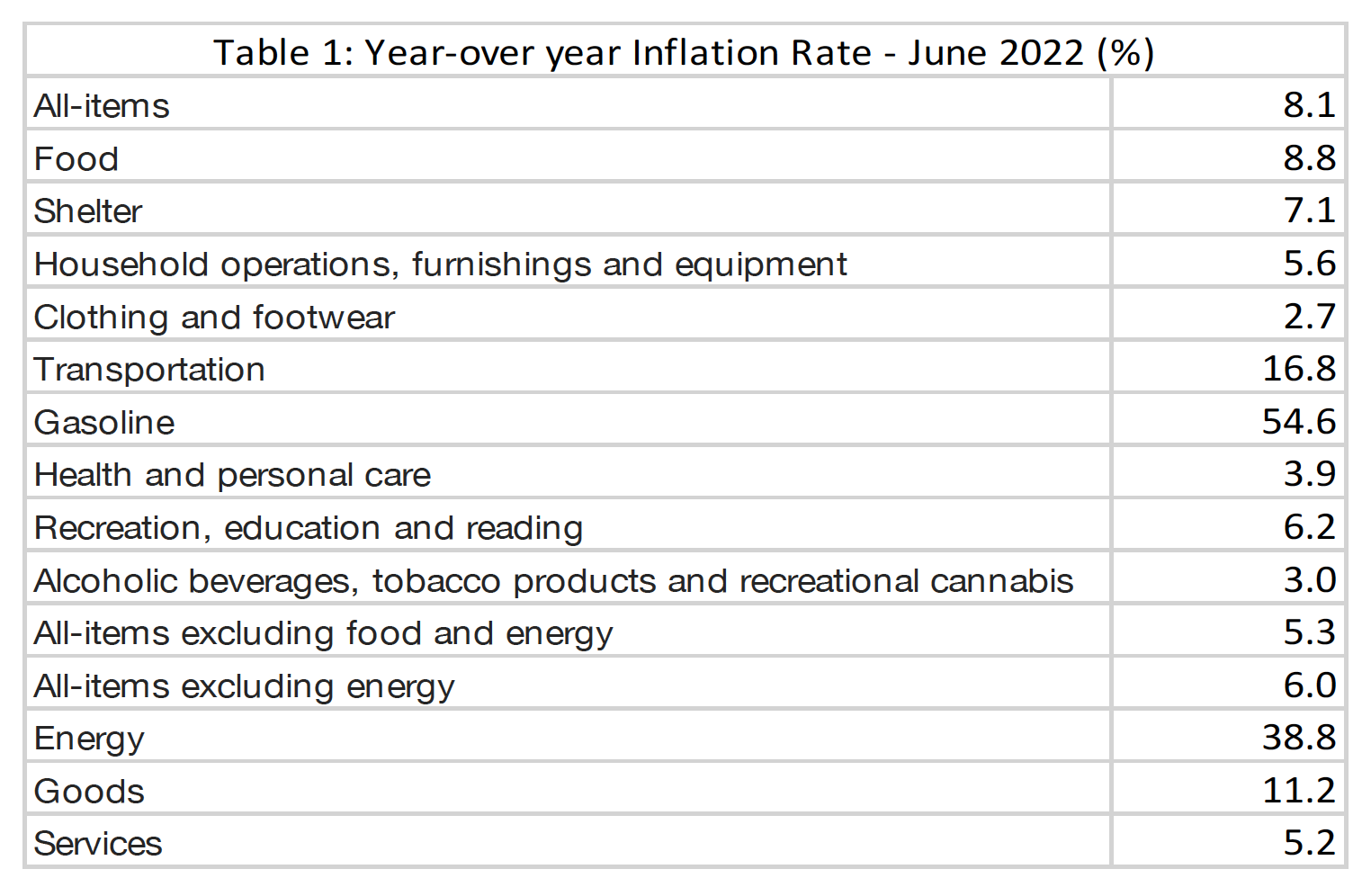 In 1991, the Government of Canada and the Bank of Canada established an inflation target of 2 percent for the All-items CPI with an inflation control range of 1 to 3 percent. The Bank of Canada was mandated to conduct monetary policy with the goal of maintaining the rate of inflation at the mid-point of the target range.  Since April 2021, the year-over-year inflation rate has been above the top of the target range.  There are several reasons for the sharp increase in the inflation rate over the past 12 months including the pent-up demand following the pandemic, the supply disruption due to the COVID-19 pandemic, the war in Ukraine, and the sharp rise in commodity prices following the invasion of Ukraine.

To illustrate the impact of the recent increase in the inflation rate on price levels we compare the actual CPI with a hypothetical case where the year-over-year inflation is assumed to be equal to the target rate of 2 percent from March 2020 onward (Figure 1). If the inflation rate had stayed at the target level, the CPI level would be 6 percent lower than what we are experiencing.  For a consumer that has a consumption pattern similar to the CPI fixed basket, the recent rise in inflation represents a 6 percent increase in its cost of living relative to what would have been the case had inflation stayed on target. For other consumers with different consumption preferences, the impact on their cost of living could be higher or lower than 6 percent.  For example, if a household spends most of its budget on food, shelter, and gasoline, it will experience a larger increase in its cost of living than 6 percent.

Another way of seeing the potential impact of the cost of living is to examine the average inflation over the last three years.  Figure 2 shows the average year-to-year inflation rate nationally and in the provinces and territories. On average, inflation in Canada was 4 percent a year since June 2019.  PEI, Nova Scotia, New Brunswick, Quebec, Manitoba, and Alberta experience inflation higher than the national average.  An interesting observation is that the territories, despite their remoteness have seen average inflation lower than the national average. One possible explanation is that the CPI only includes prices in Yellowknife, Whitehorse, and Iqaluit.  Prices in rural areas outside those cities are not covered.

While the Bank of Canada cannot influence the global drivers of the recent increase in the inflation rate it can affect domestic demand for goods and services by raising interest rates.  Since March 2022, the Bank of Canada has raised its target policy rate by 2.25 percentage points.  We have already observed some impacts on the housing market.  The bank of Canada projects that the All-items CPI inflation rate will decline to 2 percent by 2024.

There is no official measure for First Nations’ inflation on-reserve, nor does the CPI cover it, as CPI data is drawn from the general population (representing most of Canada’s consumption).  Many First Nations are located far from the main population centres and for many of them, access to many goods and services is challenging, partly because of the lack of year-round road access.  It is therefore clear that most First Nations experience a cost of living much higher than the rest of the country.

When the federal government funds housing, education, health, and child welfare programs, it must consider the higher cost of living on-reserve. The challenge is what would be the basis for the inflation adjustment and how the adjustment is calculated based on the specific context of each First Nation.

We propose two options for adjusting First Nation program funding for the cost of living.

Option 1: Adjustment based on the Market Basket Measure (MBM)

The 2019 Poverty Reduction Act made MBM Canada’s official poverty line. The MBM is based on the cost of a basket of goods and services that allows individuals and families to maintain a basic level of living standards.   The basket is different from the CPI fixed basket as it only includes items that are necessary for meeting basic needs.

The estimated thresholds are the disposable income needed for a family of four to afford its basic needs. The difference between threshold estimates largely reflects the cost-of-living differences.  If MBM estimates were developed for First Nations living on-reserve, we could use the difference between the provincial MBM and the First Nation MBM (for that province) as a measure of the cost-of-living difference.  It can be argued that living conditions and the cost of living in the First Nations reserves are close to those observed in the territories, given factors such as low population density, geography, access to products and services, etc. It is, therefore, possible to use the territories’ MBM thresholds as a proxy for First Nations on-reserve.  The average MBM for the territories is about 24.8 percent higher than the average MBM for the provinces. On this basis, the cost of living on reserve is about 24.8 percent higher than that in the rest of the country, which means funding for First Nations should be adjusted by 24.8 percent to account for the higher cost of living. One main shortcoming of this approach is that it does not consider significant contextual differences among First Nations.  An alternative approach that better recognizes these differences is considered below. 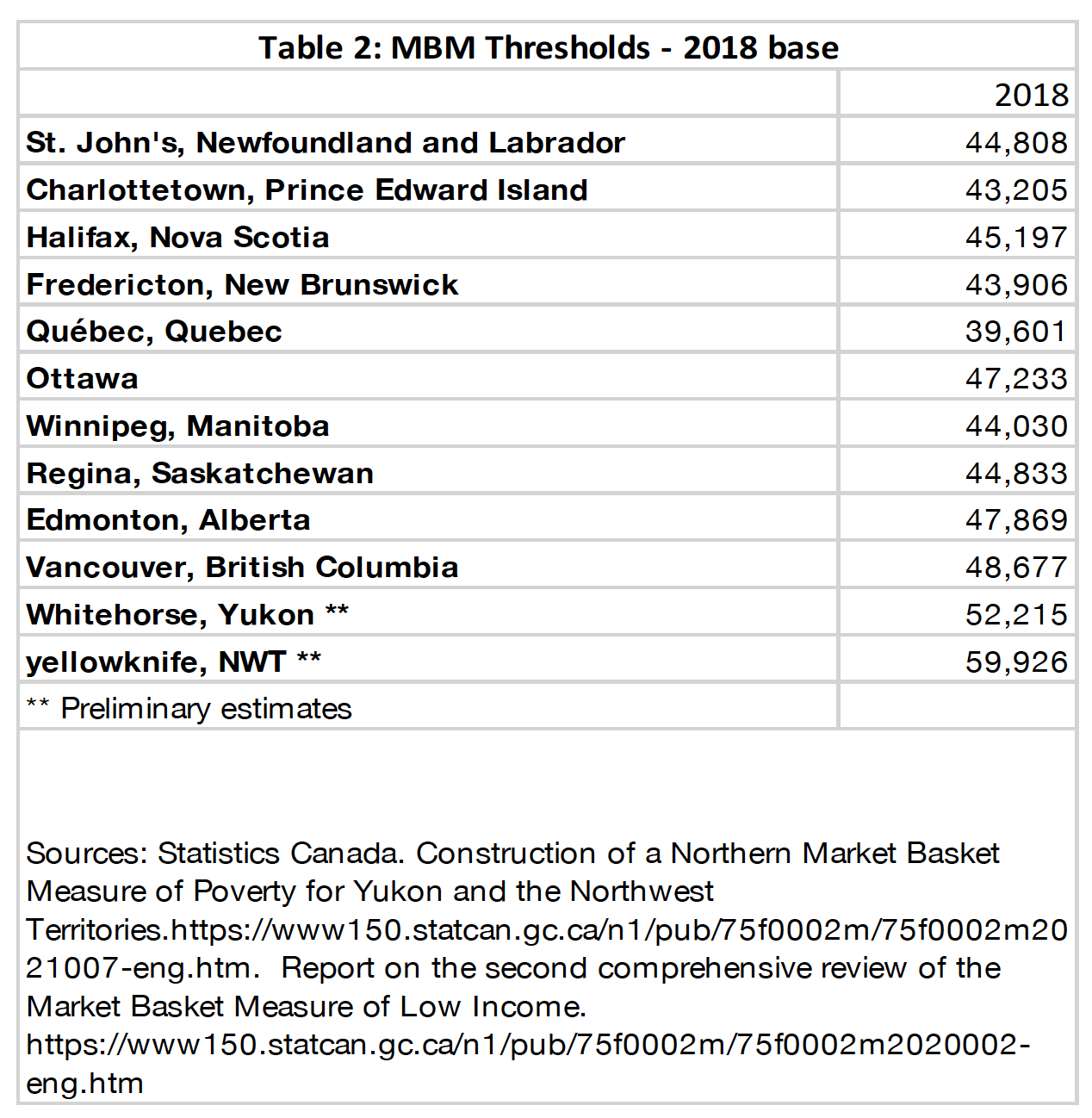 Option 2: Adjustment based on the remoteness cost factor

To consider the specific context of First Nations, one option is to use a measure of their remoteness.  Statistics Canada has developed an index of remoteness using a gravity model approach based on travel costs (as a proxy for distance) and agglomeration factors. The index is continuous with values between zero and one for 5211 Census Sub-Divisions (CSDs).  This provides a remoteness index for all First Nations[1] communities. The remoteness index itself does not provide information on the cost-of-living differences among the First Nations but it can be used to model or understand the relationship between costs and remoteness.  In 2018, an internal working group of Indigenous Services Canada (ISC) that included members from central agencies and the Assembly of First Nations (AFN) oversaw the development of a functional relationship between costs and remoteness for First Nations communities.

A statistical analysis[2] was used to better understand the relationship between labour and material costs and the remoteness index and whether the community has access to road/ferry.  In 2021, ISC used several alternative statistical techniques to test the robustness of the original analysis.  The following formula was developed to arrive a cost adjustment factor to account for the impact of remoteness on the cost of programs delivered to First Nations on-reserve.  The functional form was estimated assuming the organizations that deliver the programs are located on-reserve. The coefficients (0.863 and 0.508) were estimated using data for the compensation of federal employees that work in isolated posts and the cost of shipping material to those posts.

For example, if Bunibonibee Cree Nation in Northern Manitoba with a remoteness index of 0.7 (RI=0.7) and no access to roads (Fly-in=1) wants to estimate its cost adjustment factor it can plug in its remoteness index value and the Fly-in value of 1 in the cost adjustment formula (0.863*0.7+0.508*1=1.11).  This means the adjustment factor is 111 percent, implying that this community’s cost of living is roughly 111 percent higher than that of a nearby major population centre.

This approach can be used to estimate the cost-of-living adjustment for all First Nation programs.

The options presented here address the cost of living or price level differences for First Nations, which reflect the cumulative impact of higher inflation over the years. Once the price level is adjusted, future funding should be indexed to an official inflation rate.  This rate could be, for instance, last year’s CPI inflation rate or an average of the past three years of CPI inflation.

Inflation gradually erodes the purchasing power of individuals.  The post-pandemic rise in inflation has become a major challenge for families and policymakers.  For marginalized communities and First Nations, the impact of inflation is normally more severe.  The options presented here provide proxies for offsetting the impact of past inflation on First Nation programs.