Elections are about choices.  To frame positions – and potentially, inform voter choice at the ballot box – political parties define their governing plans and priorities in platforms.  For the past three decades, political platforms have been part of election time discussion and debate in Canada.  Platforms are relevant for anticipating government behaviour, signalling party priorities, and are an important tool to hold a newly elected government to account.

Platforms can be analyzed and assessed against a number of criteria, from policy relevance to implementation feasibility to credibility.  The fiscal credibility of electoral platforms are another dimension that we, at IFSD, consider of critical importance.  Using fiscal credibility as a lens, the internal consistency of platform narratives can be tested, by aligning declared priorities to proposed economic and fiscal assumptions, revenues, and expenditures.

Ahead of the 2019 election, IFSD developed principles and scoring criteria to assess the fiscal credibility of political platforms.  The assessments are designed to test for the realism of economic and fiscal assumptions, responsible fiscal management, and transparency.  Platforms are political documents and are expected to provide reliable and realistic proposals, making them different than budgets or government documents that have different requirements for accuracy, realism, and transparency.

Using this framework, the platforms of the Liberal Party of Canada (LPC), the Conservative Party of Canada (CPC), and the New Democratic Party (NDP) were assessed ahead of Election Day 2021. IFSD assessed the parties’ platforms in the order in which they were released and published its findings (LPC, CPC, NDP).

While the parties all appear to end up in relatively similar fiscal territory in a five-year period, they arrive in different ways.  The parties exposed their differences through their economic and fiscal assumptions, their fiscal management plans, and the transparency of their commitments.  These differences are reflected in their scores.

All parties project declining debt-to-GDP ratios.  This is an important measure to assess the economy’s capacity to manage debt.  Along with fiscal sustainability, debt-to-GDP ratios are used by bond rating agencies to assess sovereign risk.  LPC and NDP do so through increased revenues, and CPC through the cancellation of existing programs.  The NDP’s lower ratio is a function of its much higher projected revenues. 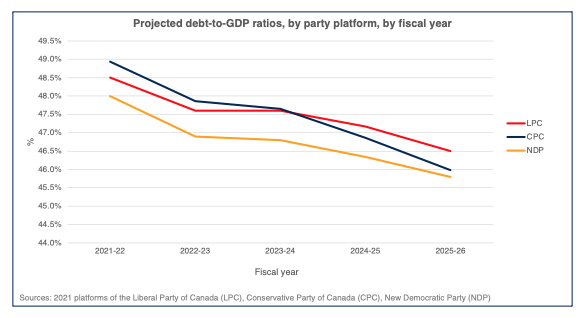 All parties project new expenditures through various policy and program commitments.  LPC and NDP project their new expenditures $78B and $209B, respectively with contingencies (shaded in the table below, $15B (LPC) and $9B (NDP) for prudence/forecast adjustments).  While they present risk adjustments, LPC and NDP lack costings by the Office of the Parliamentary Budget Officer (PBO) for some major measures.  CPC presents its expenditures without any prudence or risk adjustments.  Their major initiatives, however, were costed by PBO and released by the party. 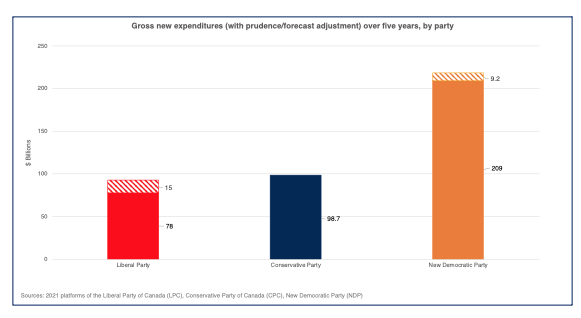 To fund their expenditures, parties propose drawing on different sources of funds.  Sources of funds include taxation, cuts to existing programs, and other revenue measures (e.g., tariffs, fees, sales of assets).  Sources of funds for LPC and NDP come through taxation.  LPC depends on new taxation measures for its funds ($25B), while the NDP proposes not only new taxation measures but also new rates for some existing measures ($185B), and adjustments to the fiscal framework ($5B).  CPC depends on savings by cutting programs, namely the childcare measure, along with others, previously booked in the fiscal framework ($37B), and closing the tax gap ($11B). 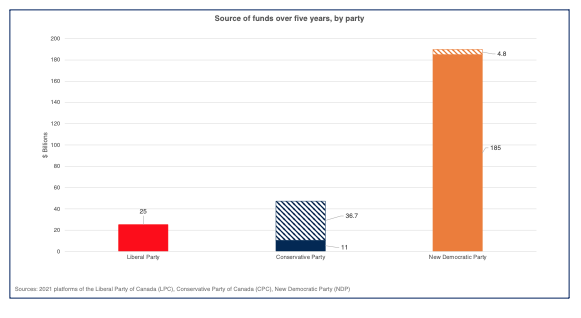 Following a presentation of what underlies the parties’ fiscal strategies, IFSD presents its scoring of the fiscal credibility of the LPC, CPC, and NDP platforms’ fiscal plans.  As depicted in the table below, LPC’s overall score was ‘good.’ The score is attributed to its economic and fiscal planning assumptions, consideration of risk, and feasibility of the implementation of its measures (in fiscal and economic terms).

CPC’s plan scored an overall ‘pass,’ attributed to its baseline economic assumptions and the feasibility of the implementation of its proposed measures.  Its score is reduced by its score in responsible fiscal management, given its lack of consideration of risk, no explicit prudence, no medium-term fiscal target, no commitment to long-term fiscal sustainability, and no mention of a medium-term fiscal anchor beyond a long-term balanced budget.

NDP’s plan scored an overall ‘pass,’ attributed to its use baseline economic and fiscal assumptions, the clarity of the presentation of its fiscal planning framework and its ‘policy’ commitment to fiscal sustainability.  The results are tempered by weaknesses in fiscal management (i.e., implementation challenges and fiscal sustainability issue) and transparency.

The three platforms scored well on the realism and credibility of their fiscal and economic assumptions by using the Office of the Parliamentary Budget Officer’s (PBO) baseline economic and fiscal forecasts. From this baseline, the LPC platform articulates economic challenges around two policy priorities: 1) the need to address the public health crisis to facilitate the opening of the economy; 2) the need to build back better to address resiliency, sustainability, and equity.

The CPC platform costing projects declining deficit and expenditures into fiscal year 2025-26.  The platform commits to investments for jobs and economic growth, but the measures are small relative to the size of the economy and their impacts on the economy are uncertain.

The NDP’s fiscal plan projects a slightly declining debt-to-GDP ratio.  There is a planned permanent increase in spending and revenues relative to the size of the economy. While there is a policy commitment to fiscal sustainability, the uncertainty surrounding estimates of proposed revenue measures and increasing expenditures would likely challenge the sustainability of the plan.

Scores for responsible fiscal management varied among the three parties’ platforms, with the LPC scoring above both the CPC and NDP.  All three platforms propose spending increases, with the LPC and NDP projecting spending increases into 2025-26.  CPC spending is front-end-loaded and projected to decline.  LPC projects new expenditures to total $78B, with $25B in revenues, and a $32B deficit in 2025-26.  As in the other platforms, a declining debt-to-GPD ratio is projected.  The fiscal plan remains sustainable over the long-term, with a tacit provision for risk ($15B forecast adjustment to address unforeseen risks, the fiscal rule of declining debt-to-GDP), as well as proposed strategic policy review to improve alignment of government expenditures to priorities.

In its plan, CPC projects net expenditures declining from a peak of roughly $30B in 2021-22 to -$0.7 in 2025-26. Platform commitments have an estimated total cost of approximately $51B over five years.  The deficit is projected to decrease from $168B to approximately $25B over the same period, which reflects in part, the $27B in savings from the cancellation of the childcare program announced in Budget 2021.  There is a lack of consideration of fiscal risk in the CPC plan.  In particular, the 6% increase to the Canada Health Transfer (CHT) may require significant reductions to other spending measures or increases in revenue measures to maintain long-term fiscal sustainability.

The NDP proposes roughly $215B in new spending (including a $9B contingency fund), with gross revenues of approximately $185B (net revenues to the fiscal framework of $166B) over the next five years. Some revenue measures, such as the proposed wealth tax, have higher degrees of uncertainty.  The platform costing includes provisions for risk with room for revenue forecast errors, as well as a contingency fund to address uncertainties related to new spending proposals.  While the overall fiscal framework proposes a declining debt-to-GDP ratio, permanent spending from major national measures, e.g., pharmacare, dental care, a universal livable basic income for people with disabilities and seniors, etc., likely make the long-term fiscal structure unsustainable.

Transparency scores were similar for LPC and CPC, with NDP scoring the lowest, with roughly half the score of the other two parties.  LPC and CPC commitments are relatively straightforward with respect to implementation, cost, and impacts.

For LPC, there are two risks that merit consideration.  First, the revenue generating proposal to close the tax gap, will require better articulation as it is both new and a significant contributor to projected revenues.  Second, while the climate change strategy includes funding for economic transition, additional fiscal pressures in this policy commitment are likely. Another consideration is that some major measures, e.g., the Guaranteed Income Supplement (GIS), proposed by LPC, were not costed by PBO.

The CPC’s signature health care measure, i.e., Canada Health Transfer (CHT), was asserted to be $60B over 10 years, which IFSD estimates to be closer to $36B over the same period.  The CPC’s Personal Low Carbon Savings Account was not costed by PBO, and risks being more complex to implement and administer, with additional cost burdens.    Both CPC and LPC platforms present information that is sufficient to consider potential impacts of measures on Canadians, and differences with the status quo and proposals from other parties.

The NDP, however, proposed few, if any indicators on the expected impact of their proposed revenue and expenditure measures on the economy as a whole, on specific sectors (e.g., oil and gas), and on capital markets (e.g., wealth tax, capital gains inclusion).  The platform commitments are ambitious and complex, with some major measures not costed by PBO.  Implementation of these commitments are resource intensive and are dependent on collaborations with other orders of government and may be unrealistic within the proposed timeframes.

In future elections, it would be unfortunate for parties to not have their key measures costed by the PBO.

LPC, CPC, NDP all present platforms with declining debt-to-GDP ratios and declining spending, but the nuances of the parties’ plans impact their fiscal credibility score.*  LPC presents a plan with consideration of risk and limited fiscal exposure in its straightforward commitments.  CPC’s similarly straightforward plan, proposes a reduction in spending with a significant gap in consideration of fiscal management and risk.  NDP’s plan proposes measures to significantly expand the role of the state.  While there is consideration of economic and fiscal risk, their plan has a signicant gap in transparency given its limited consideration of the implementation and impact of its proposals.

As voters cast their ballots, they may wish to consider the fiscal credibility of the parties’ platforms.  Platforms can play prominent roles in setting both policy direction and budget trajectories for governments.  From the perspective of fiscal credibility, parties with the narrowest gaps between their political narratives and their economic and fiscal plans offer the most coherent approach for voters.

* Should the costed platforms of other parties become available by close of business on Friday, September 17, 2021, IFSD will produce their assessments and will endeavour to update this note.