Government Funding for Homelessness: Value for Money, or Money for Nothing, or Somewhere in Between?

National Housing Day is fast approaching and the National Housing Strategy is just around the corner. With this in mind, staff at the Institute of Fiscal Studies and Democracy (IFSD) thought it would be a good time to do a stocktaking of how governments are doing with the billions of dollars they are already spending on homelessness. The exercise was motivated by one fundamental question: Does the current funding structure for homelessness programs produce the desired results? A summary of the results can be found here, keeping in mind that this analysis exclusively focuses on initiatives to support Canada’s population of homeless people and does not address current and future funding for affordable housing that is not tied to homelessness initiatives.

At the federal level, as per Budget 2017, the Government of Canada is currently planning to spend about $4 billion over the next 11 years on homelessness initiatives. The biggest slice of which is the Homelessness Partnering Strategy, at $2.1 billion.

Of course, this is all about to change with the announcement of the National Housing Strategy. While details are scant, what we’ve heard so far is that the federal government is planning to commit about $40 billion over the next decade to housing and homelessness initiatives (some of which will be repurposed from existing homelessness, housing, and infrastructure programs), premised on the commitment that housing is a right – a noble goal, no doubt.

But the federal government is not the only level of government that spends on homelessness initiatives. The provinces and territories play a part as well. The Government of Ontario, for example, plans to spend $50 million over six years as part of the Local Poverty Reduction Fund. It also spends nearly $300 million annually on the Community Homelessness Prevention Initiative, in partnership with municipalities. The Government of Ontario also partners with the federal government as part of the Investment in Affordable Housing program (each government matches $1.9 billion over 8 years).

It’s important to keep in mind that neither of these levels of government generally gets their hands dirty when it comes to delivering homelessness programs. Much of the funding is transferred to municipalities, where it is employed to meet the goals outlined by these higher levels of government.

And while the numbers may be big when announced at the federal or provincial-territorial level, the rubber really meets the road when it trickles its way down to the municipalities. Take Ottawa as an example (when our final research paper is ultimately published, it will also include Toronto). From all of these initiatives, it received over $73 million in the 2016-17 fiscal year. It then topped this up with an additional $9.3 million as part of its Housing and Homelessness Investment Plan, taking the total spent on homelessness initiatives to nearly $83 million in the 2016-17 fiscal year – not bad for a city of less than a million people.

Money for Nothing and the Cheques are Free

Unfortunately, it’s also at the municipal level where the link between money and performance can get disconnected. Through our deep dive into the funding for homelessness initiatives and the associated outcome reporting, we found that funding from the Governments of Canada and Ontario do not generally appear to be tied to outcomes. Results could be good, bad, or ugly, and the money seems to flow just the same. Best practices are not necessarily shared across jurisdictions, so that lessons learned in one part of the country, province, and even municipality may need to be learned all over again somewhere else. Finally, data do not appear to be collected in a way that allows them to be used across programs and jurisdictions, meaning outcome reporting in silos has not supported the use of complementary data across programs. Keep in mind that these conclusions only apply to federal funding as well as provincial and municipal funding in the province of Ontario. However, given the resources at the disposal of these governments compared to others in the country, we wouldn’t be surprised if the conclusions were to be similar elsewhere in Canada.

Ottawa: ‘If you know you can do better, then do better’

But just because funding isn’t tied to outcomes doesn’t mean that the outcomes themselves are poor. In order to evaluate that, you need to look to those programs where outcome reporting is required. Unfortunately, there are significant resources employed with no performance reporting. Similarly, there is spending that requires reporting but has no targets associated with it or the targets are determined by the jurisdiction reporting the outcomes without any context or benchmarking.

Fortunately, there is a program to address chronic homelessness offered in Ottawa that does allow for comparisons. That is the Housing First program provided with federal funding as part of the Homelessness Partnering Strategy (HPS). Housing First is an evidence-based approach to housing chronically homeless people which skips the middle-man by placing people directly in housing with intensive supports, without the need to be sober or having gone through any sort of housing-readiness program. With an 80%-plus success rate, Housing First is the gold-standard approach for helping people get out of the revolving door of misery which is chronic homelessness. (One of our coauthors, Randall Bartlett, wrote about this in Maclean’s in August 2017.)

Again, similar to the broad conclusion about the link between homelessness program funding and outcomes, the City of Ottawa is receiving federal funds but not delivering results in line with its peers. In this case, we compare the success of the City of Ottawa’s HPS-funded Housing First program in keeping people housed for six months with the provincially-funded programs offered by the Canadian Mental Health Association Ottawa (CMHA Ottawa) and Sandy Hill Community Health Centre (Sandy Hill CHC) programs. 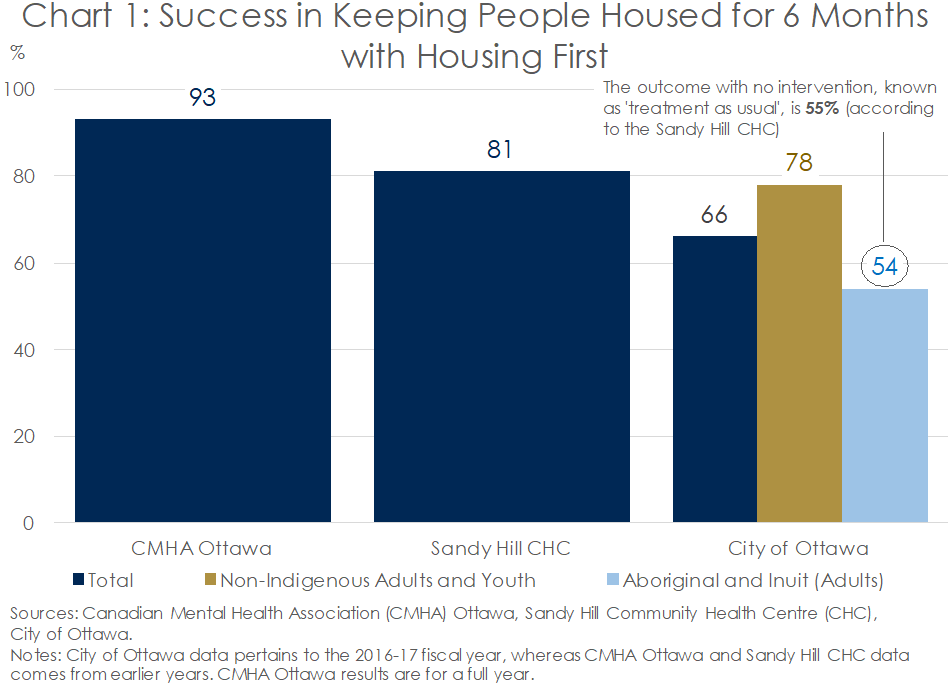 To be fair to the City of Ottawa, it should be noted that the poor performance of its HPS-funded Housing First program in serving the Aboriginal and Inuit homeless population during the 2016-17 fiscal year was a dramatic improvement over the prior year. Notwithstanding this positive momentum, an investigation into the reasons behind for these unacceptable results, in order to develop strategies to improve it, would seem to be worthwhile.

Further, given the strong results of CMHA Ottawa and Sandy Hill CHC Housing First programs, the evidence points to taxpayers getting ‘value for money’ from these homelessness interventions. In contrast, the poor results of the City of Ottawa’s HPS-funded Housing First program suggest taxpayers are essentially spending ‘money for below average performance’ for this specific homelessness initiative, particularly as it applies to Ottawa’s Aboriginal and Inuit population.

This analysis wasn’t meant to target the City of Ottawa’s homelessness programs. Instead, it was intended to highlight the fact that much of the funding for homelessness initiatives – be it at the federal, provincial, and municipals levels – is not tied to outcomes. This is a problem, as well-intended funding to support our communities’ most vulnerable may be being spent in a manner which does not meaningfully help those people. And, with the National Housing Strategy just around the corner, this could mean tens of billions of dollars spent on programming that doesn’t help homeless people or people at risk of homelessness nearly as much as it could.

As John Wooden said, “Never mistake activity for achievement.” Major announcements don’t mean major change. In order for the National Housing Strategy to meaningfully affect change, all levels of government must ensure that funding is tied to the desired outcomes. And as a reflection of the diversity of Canada, this funding must also take into consideration demographic, geographic, and other confounding factors.

It’s a long road ahead to eliminate chronic homelessness in Canada. It’s up to all levels of government to make sure that road is paved with more than good intentions.