IFSD finds that that the NDP Party Platform Costing merits an overall ‘pass’ rating including a ‘pass’ rating on the principles related to realistic economic and fiscal assumptions and responsible fiscal management; and a ‘fail’ rating with respect to transparency.

The New Democratic Party (NDP) of Canada released its 2019 Platform Costing (A New Deal for People: Our Fiscal Plan) on October 11, 2019. The document outlines the NDP fiscal approach and includes the costing of specific revenue and spending measures and a summary of total allocations in the NDP fiscal framework.

From a transparency perspective, IFSD wishes to note that the NDP costed platform should have been released earlier in the campaign – before the commissioned debates and well before the start of advanced polling (not the day advanced polling begins). The late release of the costed platform unduly limits debate and scrutiny of the NDP fiscal plan by leaders and the media.  Furthermore, it unduly limits the time for consideration and reflection by voters with respect to the issue of fiscal credibility of the NDP platform.

Overall, the fiscal strategy in the NDP Party Platform Costing is one of significant fiscal expansion and a commitment to a reduction in the debt-to-GDP ratio over the medium-term.

Proposed spending and revenues are increased by more than $30 billion annually (more than 1 percent of GDP) over the medium-term starting in 2020-21. The projected budgetary deficit rises to $33 billion (including a contingency fund) in 2020-21, from $14 billion in 2018-19, and declines by about half to $16.5 billion in 2023-24. The (accumulated deficit) debt-to-GDP ratio is projected to rise to 31.3% in 2020-21, from 30.9% in 2014-15, and then falls to 30% in 2023-24. Relative to status quo projections, the debt is increased by about $25 billion over the next five years, which includes a provision of $2 billion in compensation to First Nations children associated with a recent ruling of the Canadian Human Rights Tribunal.

The proposed increase in revenues starting in 2020-21 would be historic in magnitude. Revenues are generated from a significant (3 point) increase in corporate income taxes; a rollback in capital gains inclusion; tax integrity type measures to restrict the use of tax havens; and new taxes related to wealth, digital services and an increase in the top marginal personal income tax rate.

The NDP fiscal plan is given a ‘pass’ rating on realistic assumptions. The costed platform and projected budget balance are based on economic and fiscal baselines prepared by the independent Parliamentary Budget Office (PBO). While there is discussion of the importance of strengthening key public programs to enhance economic growth, there is no discussion of the challenges related to competitiveness and productivity or the potential negative economic impacts associated with large corporate tax increases over the short-term. While there is reference to the federal government’s fiscally sustainable position, as estimated by the PBO, there is little discussion related to the fiscal uncertainty linked to the introduction of new taxes on long-term fiscal sustainability or the fiscal challenges associated with a potential economic downturn over the short-term.

The NDP fiscal plan is given a ‘pass’ rating on the principle of responsible fiscal management. The NDP fiscal approach is based on an indicated relatively low and declining debt-to-GDP ratio. The plan wisely includes a contingency fund to address economic and fiscal uncertainty. It is the first party platform released in the 2019 campaign to include a prudence adjustment.

The NDP fiscal plan is given a ‘fail’ rating associated with the principle of transparency. The fail rating reflects factors in addition to the relatively late release of the document – after the commissioned debates and on the same day as the start of advanced polling.

The NDP platform makes good use of PBO costing, though the vast majority of spending measures use fixed envelopes rather than PBO cost estimates. Further, no effort was made to examine the economic and fiscal impacts of large and complex revenue and spending adjustments over the short or medium-term horizons. This is compounded by the fact that over 90% of revenue measures were judged by the PBO to have high uncertainty. Little background information was provided on the 70 measures highlighted in the document in addition to information provided in the 14 PBO costed measures.  The costed platform did not provide an implementation strategy with timelines and contingencies on major initiatives like Pharmacare, dental care, large housing and First Nations initiatives. 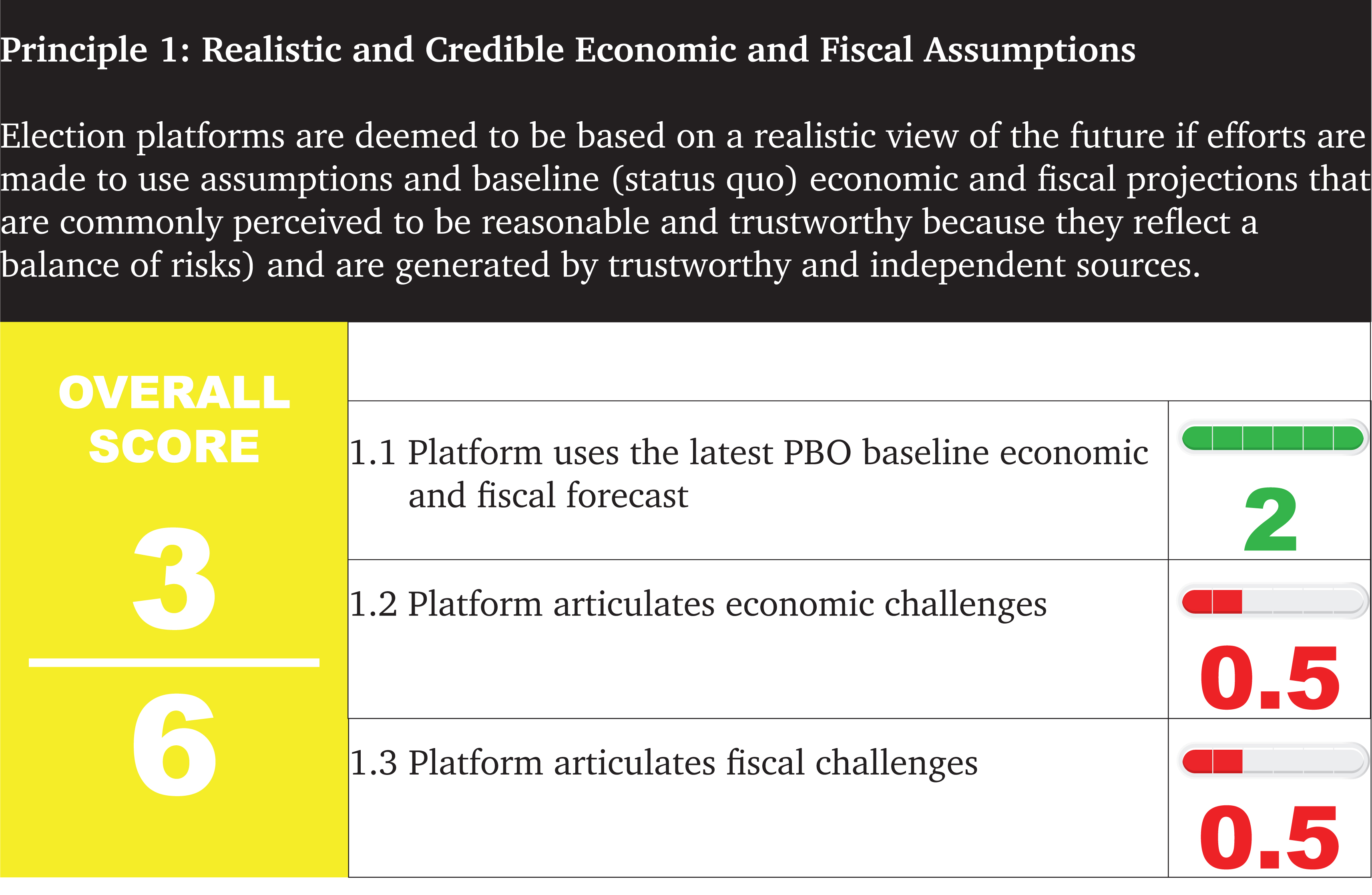 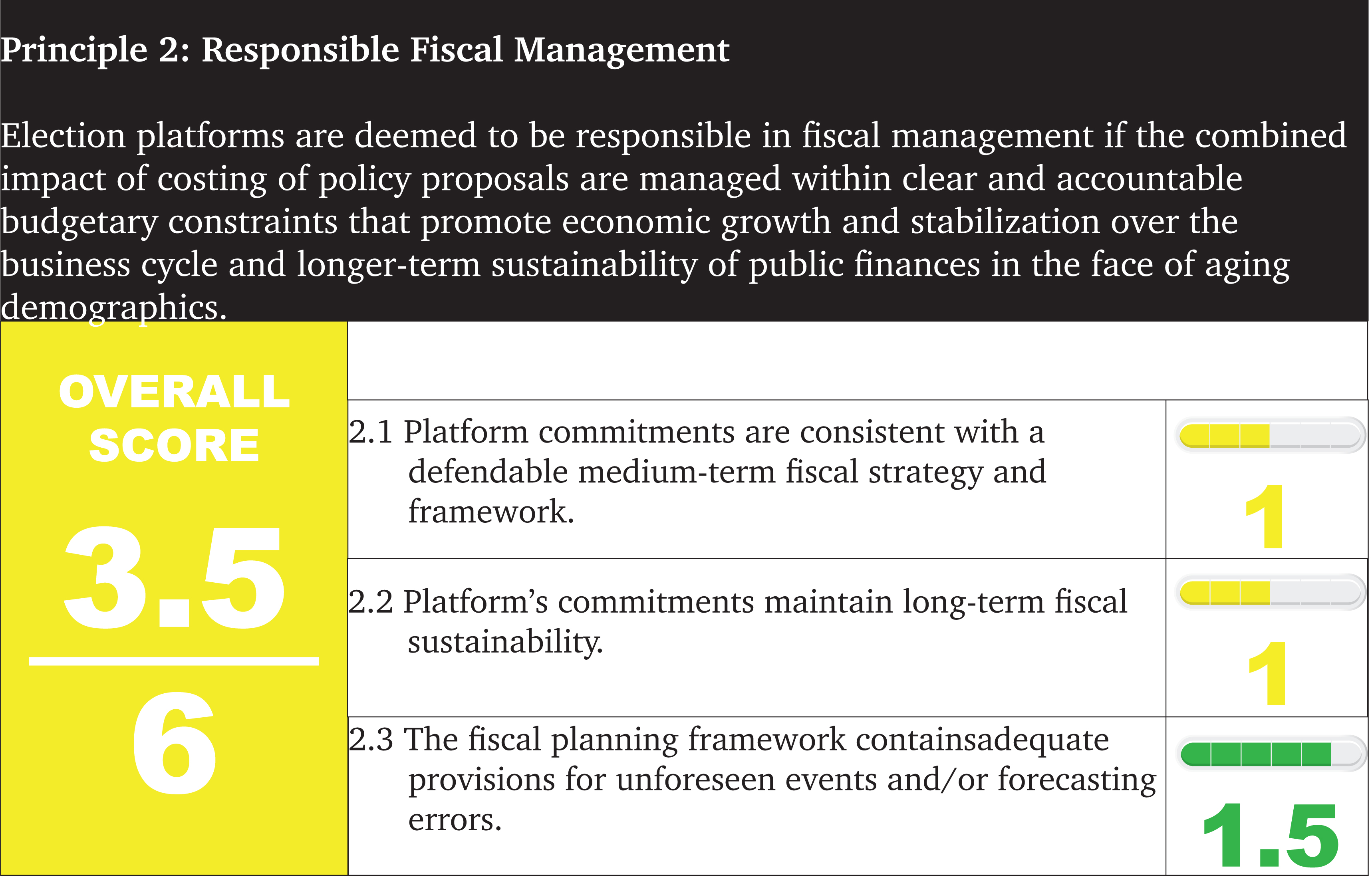 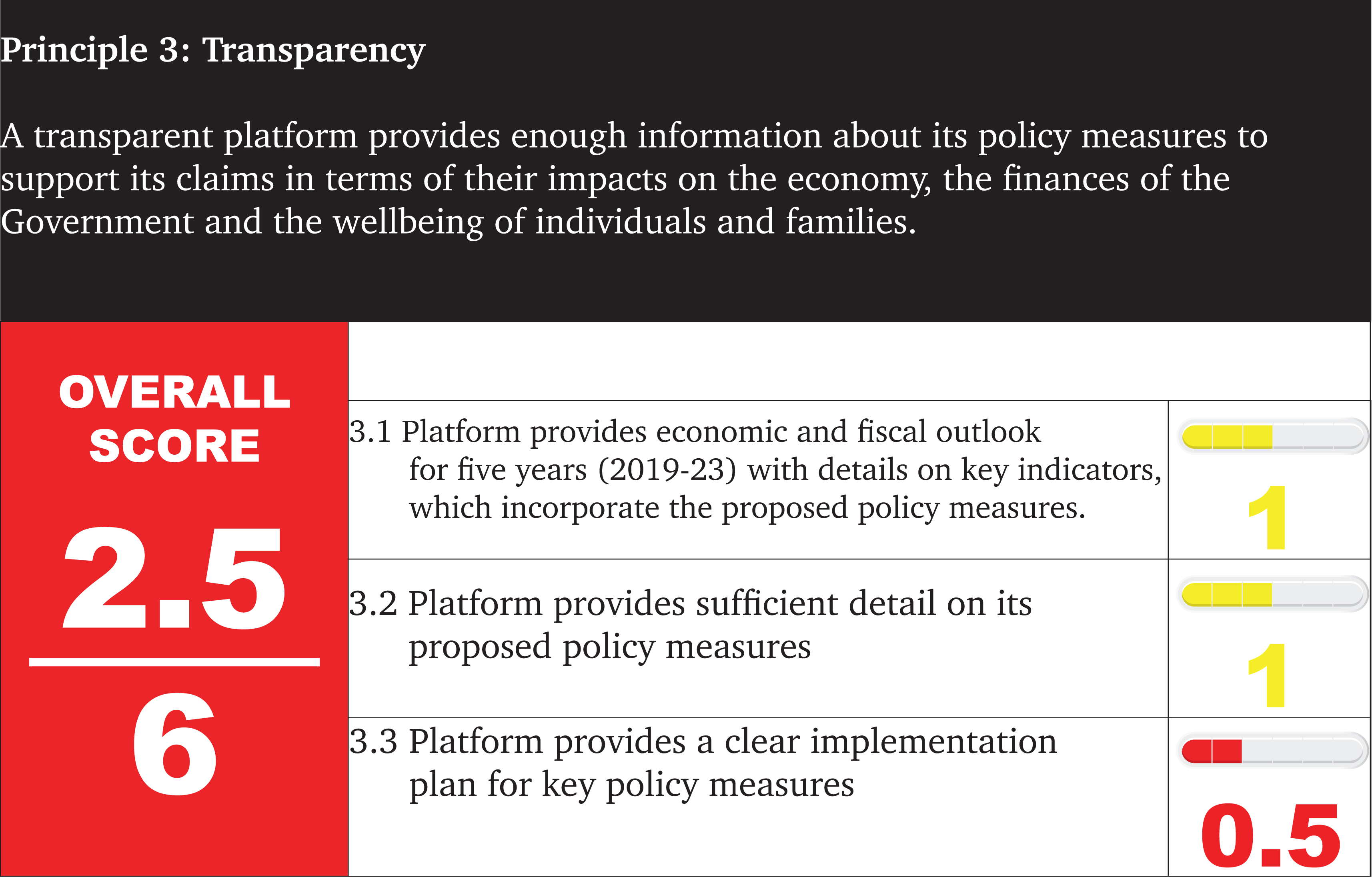