The Canada Infrastructure Bank - A Subsidy by Another Name

There has been a lot of discussion about the returns private-sector investors are going to require to make investing with the Canada Infrastructure Bank (CIB) a viable option. At a minimum, pension funds must make around a 6% rate of return on their investments, and similar return thresholds apply to infrastructure specifically. However, they should reasonably expect to make much more than that. The reason is that, in addition to being compensated for growth in overall economic activity, investors must be compensated for the risk associated with investing in large, illiquid assets with uncertain returns such as infrastructure. Indeed, JP Morgan Asset Management and other asset managers put the annual rate of return from investing in infrastructure in the range of roughly 10% to 15%. This includes returns from both revenues and capital appreciation.

And in the case of ‘greenfield’ investments (e.g. new construction), such as the unique and transformative projects that are being trumpeted as the goal of the CIB, the rates of return should be even higher. This is to compensate investors for the risks associated with an uncertain stream of future revenues. In the discussion that follows, I will explore these concepts to justify the high rates of return required by private investors purchasing infrastructure assets, point out that the unequal sharing of risk proposed by the federal government is essentially a subsidy by another name, and then use this analysis to argue that the CIB needs a fundamental rethink before it is brought into being.

Why are the expected rates of return on greenfield infrastructure investments so high?

Infrastructure assets take many forms, and can vary from seaports and airports to toll roads and highways to public utilities. Each infrastructure subsector is subject to its own subsector risk and return characteristics. For instance, some subsectors are more correlated with economic activity than others, such as seaports which are closely tied to international trade flows. Still others provide a service where consumption doesn’t tend to fluctuate much with the state of the economy, such as water supply. But regardless of how close the relationship is between the economy and asset returns, the starting point for forecasting the returns to infrastructure investment is economic growth, roughly estimated by real GDP growth and CPI inflation. And, together, real GDP growth and CPI inflation essentially provide the growth rate of nominal GDP or income for the economy. The reason for the importance of growth in a specific economy in driving revenues is the same as it is for real estate: location, location, location.

If a track record for the revenues of an infrastructure asset exists (in the case of a ‘brownfield’ or pre-existing asset), the forecast of nominal GDP can reasonably be used as the basis for projecting future revenues. The outlook for nominal GDP growth is also used to help forecast the revenues of assets that have yet-to-be or were recently built (‘greenfield’ or newly-built assets). Of course, in this case, there is no way to estimate the historical relationship between nominal GDP growth and revenue growth of the infrastructure asset in question. In this case, information from comparable assets is used to provide insight into what the return structure might look like. However, depending on how similar the assets are, the uncertainty around the return forecasts can be substantial. And the greater the uncertainty of future asset returns, the greater the return that will be necessary to compensate investors for the additional risk. Indeed, this is a basic tenant of finance – the greater the risk of an investment, the greater the return an investor will require to be compensated for that risk. And given the uncertainty around their future revenues, greenfield investments – the widely-advertised objective of the CIB – require return in and above that of similar brownfield investments that have pre-existing revenue streams. And beyond this additional revenue or usage risk, greenfield investments are also subject to completion risk related to project construction (it’s not an issue for existing assets).

It should be noted that all of these risks can be mitigated to some extent, and they would never be considered static across jurisdictions. For instance, political and regulatory risk is clearly much higher in Venezuela than in Canada. Further, completion risk on greenfield investments can be reduced through the use of public-private partnerships (PPPs), for example, as they have a track record of completing projects on time and on budget (despite being subject to higher financing costs than the public sector).

In addition, while real GDP growth and CPI inflation generally form the starting point for determining the return on infrastructure investments, there are certainly better proxies for growth in future returns for individual subsectors. For example, revenues on seaports would be better estimated by the growth in international trade flows and the outlook for the currency in addition to nominal GDP growth. In the case of public transit, urbanization rates, population growth, changing home prices relative to incomes, and income growth would also serve the forecaster well.

Putting all of this together, one can then do the math. The IFSD is forecasting average annual real GDP growth of about 1.6% in Canada over the long term. Further, building on its past success, the Bank of Canada is assumed to be able to keep CPI inflation in line with its 2% target over the forecast. So, already, you have a roughly 3.6% annual return on the table. Then, according to ABP Investments, investors should expect that the total of all the risk premiums on greenfield investments should add up to at least 8% (see the figure below). In the Canadian case, this means investors partnering with the CIB should reasonably expect annual rates of return of at least 11.6%. Indeed, this falls at the bottom end of the range of expected total rates of return that ABP Investments and other asset managers suggest greenfield toll roads should yield. 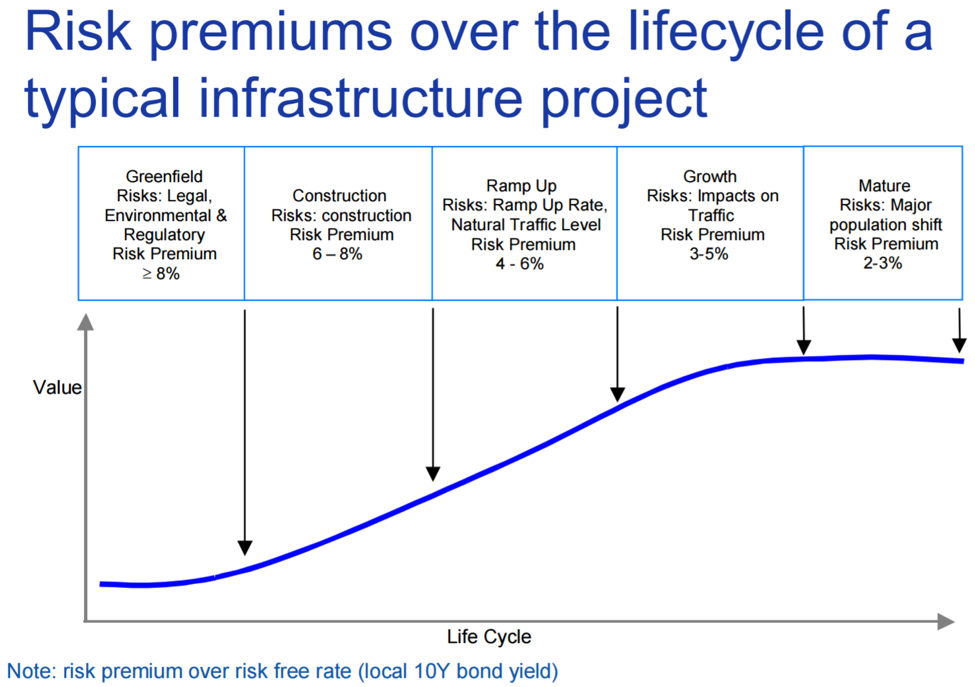 However, it should be noted that this risk premium estimate was published on the eve of the Great Recession, meaning it may be considered high as premiums have generally compressed since. That said, the OECD, referencing work by Lazard Asset Management, places the risk and return profile of greenfield or ‘new build’ investments in the same category with hedge funds and private equity (see the figure below). 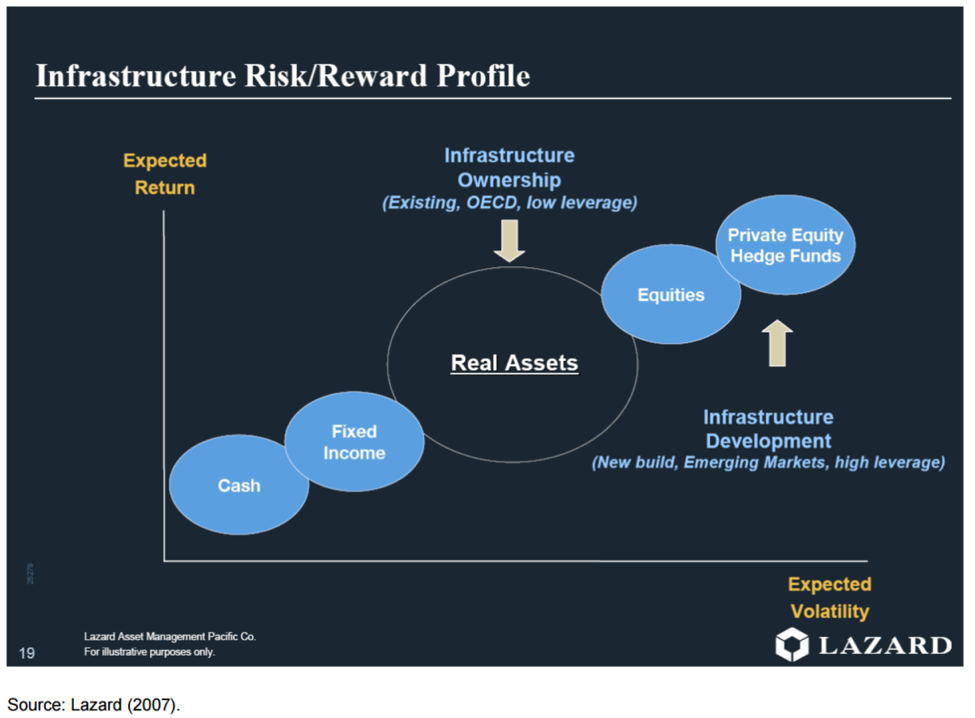 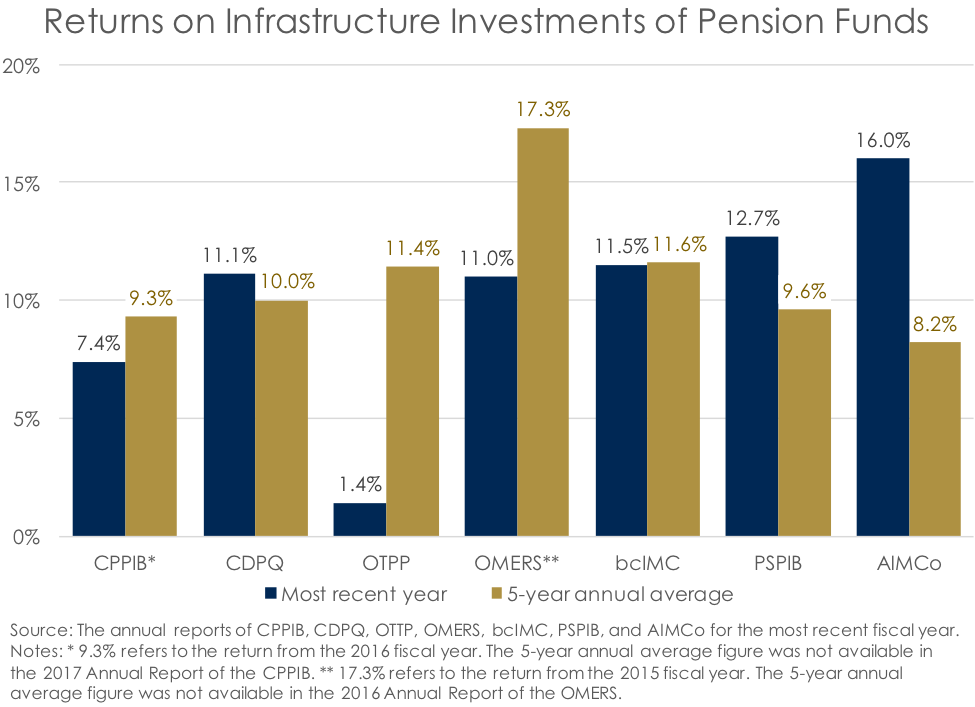 The role of the CIB in risk mitigation and transfer

Insert the CIB. Meant to catalyse infrastructure investment by attracting a much larger amount private capital relative to the public capital contributed, the CIB intends to take a minority share in revenue generating projects. However, it has been widely reported that the CIB will be assuming a larger share of the return risk relative to its ownership share by committing to make a return only after private-investor return thresholds have been met. As a result, taxpayers will earn a lower risk-adjusted return than their investment partners.

But there may be a good reason for this. For instance, governments will undoubtedly put concession agreements in place, which put an upper limit on the rate or toll that can be charged on infrastructure investments. While this avoids some of the problems related to the near-monopolistic conditions in which infrastructure exists (see prior blogpost), it also means the owners may not be able to make required returns. So, if governments decide to cap rates of return on investments, governments can instead lower the risk of the investment to incent investors to get on board despite the low returns.

And this seems to be what the CIB is intended to do. In the face of uncertain returns with possible limited upside, the CIB will take on a disproportionate share of the risk in order to attract private investment. Indeed, one could think of this as a subsidy for infrastructure investment by another name and via a different vehicle. Instead of giving grants to other levels of government and writing it off as an expense or just subsidizing users directly, the CIB will instead act to use the federal balance sheet to attract private capital toward infrastructure by lower the risk of returns. If no losses are realized, we’re all winners, and the Government of Canada can book revenues that it otherwise wouldn’t have. If losses are realized, the most that could be lost by the CIB is equivalent to the amount put it. Well, that seems to be the theory anyway (nobody seems to want to discuss what could happen to stranded assets).

Today, no revenue is booked through grants to other levels of government (indeed, it is an expense), but there is also no risk. And when it comes to federal-owned infrastructure, the federal government currently assumes all of the risk, as well all of the reward. And while governments generally don’t charge fees or tolls on the use of infrastructure in Canada, this does not imply that the current value of this infrastructure is zero. Instead, it points to a pricing issue, where prices are intentionally kept below the level where they would be in a competitive market. As such, Canadians can reasonably expect to pay more for the use of infrastructure funded through the CIB than they do today to compensate investors for the substantial risk they are taking on.

Taking this all together, one question that remains unaddressed related to the CIB: If taxpayers will be paying more for infrastructure while bearing a disproportionate share of the risk, what are they getting for it? We are told that more infrastructure will be built as a result of the CIB, but we don’t know that that this is true as no evidence has been cited to support this claim. And given the lack of a financing gap at the federal level and in many provinces, one wonders at the need for such an initiative.

Since it appears that the CIB is ostensibly being designed to provide a subsidy that encourages innovation in infrastructure use and financing, it may be worth considering alternative program instruments such as tax expenditures, grants to individuals and other direct subsidies with similar aims. A more thorough examination of the options could yield an instrument choice that better achieves the desired policy outcome, is cheaper, or both, and is at least worth the study and consideration of parliamentarians.