Canadian Economic Forecast: Revised Economic History has the Potential to Change the Outlook for the Future

In every forecaster’s life, a little rain must sometimes fall. Assumptions held for too long can leave you left behind as new information gets overlooked. Confirming evidence bias can cause you to put more weight on the data that support your views and underweight those that don’t. Hindsight bias can lead to you overweigh past experiences that may or may not be relevant to current events. And then there’s the data itself. If it’s garbage in, it’s garbage out.

Potential changes to the economic outlook

Recently, the Institute of Fiscal Studies and Democracy (IFSD) found its economic forecast under a bit of a storm cloud. Economic growth that came in well above the advance in potential GDP in 2017 has meant the Canadian economy has been operating above its capacity, thereby putting upward pressure on inflation and interest rates. But potential GDP is an unobservable variable, making the estimate of it only as good as the model and the data run through it. And, in the IFSD’s case, the model and data follow the long-standing practices of the Bank of Canada, Parliamentary Budget Officer, Department of Finance Canada, and many other institutional forecasters beyond Canada’s borders.

Under normal circumstance, the IFSD’s practice of updating its estimate and forecast of potential GDP on an annual basis would have been fine. But 2017 has been no normal year. With annual real GDP growth expected to come in at 2.9% and just published sizable historical revisions back three years, an upward re-estimation of Canada’s trend output was in the cards. And, in the case of the IFSD’s estimate of potential GDP, this revision was likely a quarter or two overdue. As a result, the IFSD’s estimate of the output gap – the percent difference between real GDP and potential GDP – has been marked down significantly, to 0.4%, in the second quarter of 2017 (Chart 1). This puts it very much in line with the Bank of Canada’s estimate of the output gap using the Extended Multivariate Filter (EMVF) – the higher of the Bank of Canada’s two measures of the output gap. 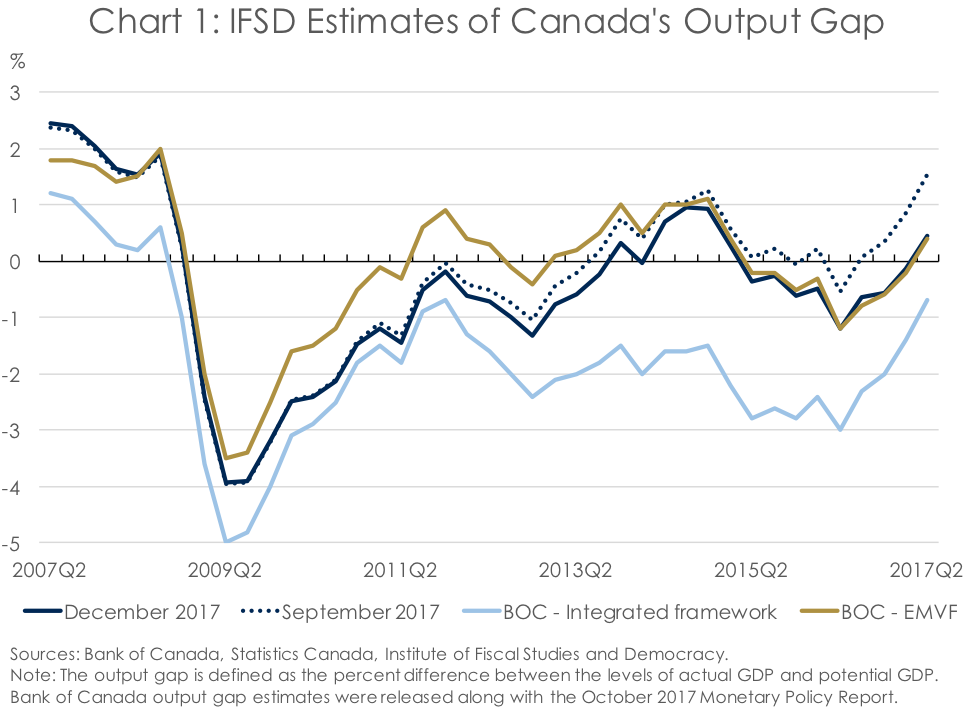 This dramatic downward revision in the IFSD’s output gap from prior quarters has marked implications for the IFSD’s outlook as a whole. A smaller output gap points to a job market which isn’t quite as tight as we previously assumed, and is therefore applying less upward pressure on wages and, ultimately, Consumer Price Index (CPI) inflation (Chart 2). And with the forecast for price growth marked down relative to prior forecasts, the IFSD’s outlook for Bank of Canada interest rate hikes has been shaved lower as well (Chart 3). 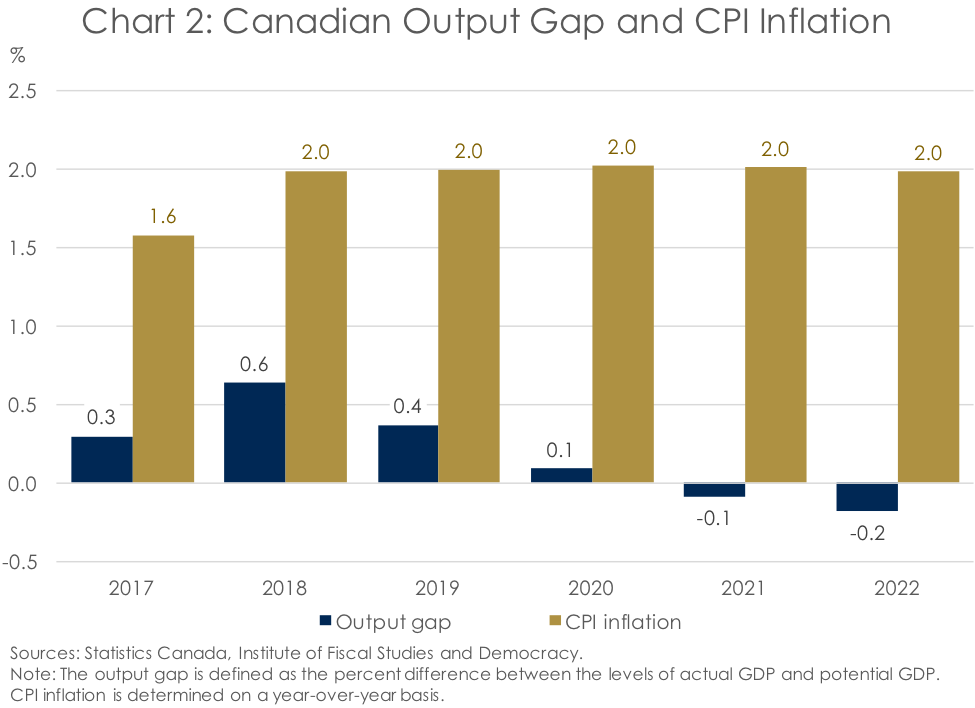 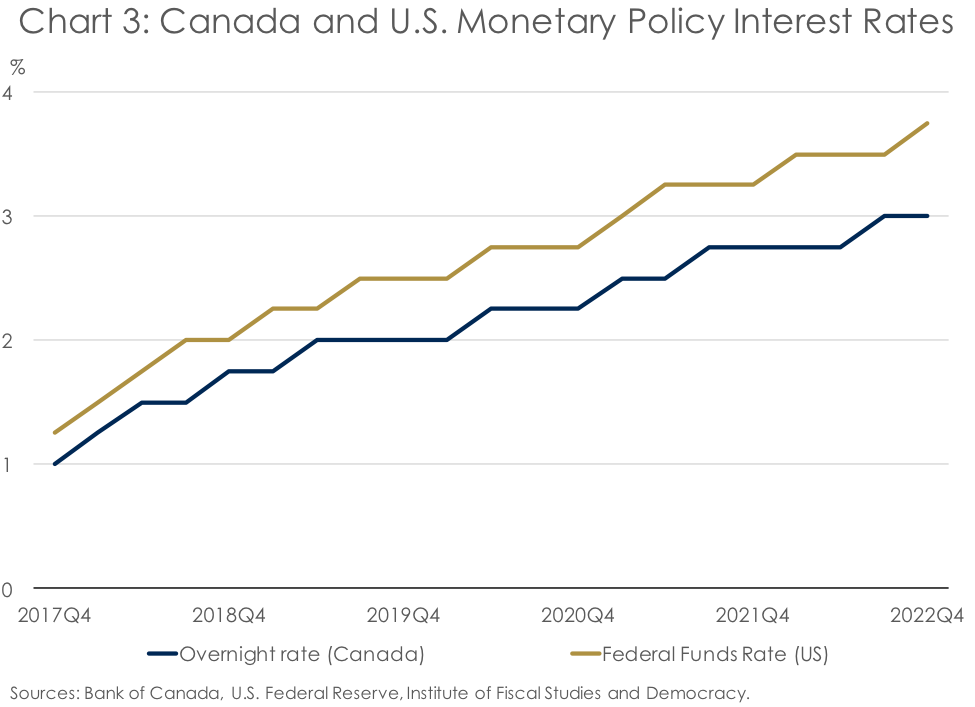 While the IFSD has lowered its forecasted trajectory for the output gap, it is important to keep in mind that the output gap remains positive over much of the 5-year forecast and its advance is only expected to be mitigated by rising interest rates. Indeed, if the Bank of Canada remains on the sidelines for an extended period, that will only continue to fuel inflationary pressures. This is mentioned as some commentators have suggested that the modest advance in real GDP in the third quarter of 2017, at 1.7% annualized, supports the view that the Bank of Canada should keep its foot on the rate-hike brake pedal. It doesn’t. The modest Q3 advance was largely chalked up to a drag from exports linked to temporary factors in the auto sector, such as work stoppages and change to certain models destined for the North American market (see here and here). With these one-off impacts having run their course, exports are expected to rebound in the last quarter of the year, thereby provide a healthy handoff heading into 2018 (Chart 4). 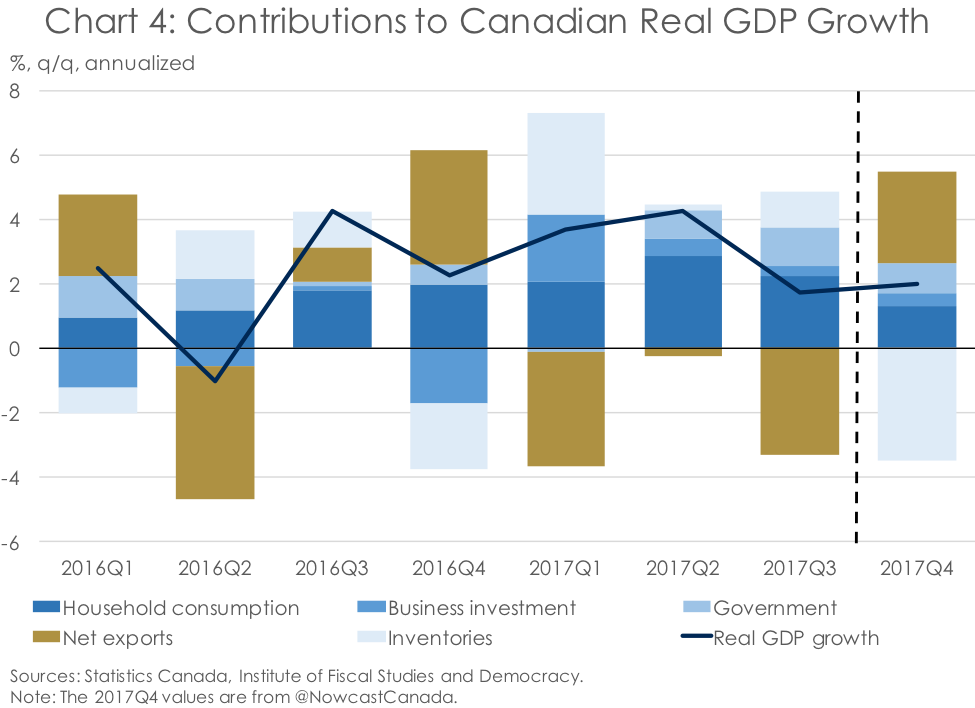 It’s hard to be indifferent to changing rate differentials

Of course, the output gap-inflation-monetary policy rate relationship isn’t everything. Market sentiment around the future trajectory for rates and inflation plays an important role as well. And this has drawn notable attention recently, as the spread between yields on 10-year and 2-year bonds has dropped noticeably in Canada on the back of short-term interest rates rising faster than long rates (Chart 5). This also holds true in the US and further afield. And, according to IFSD forecasts, this compression in term spreads is expected to persist over the length of the forecast as the Bank of Canada raises interest rates. 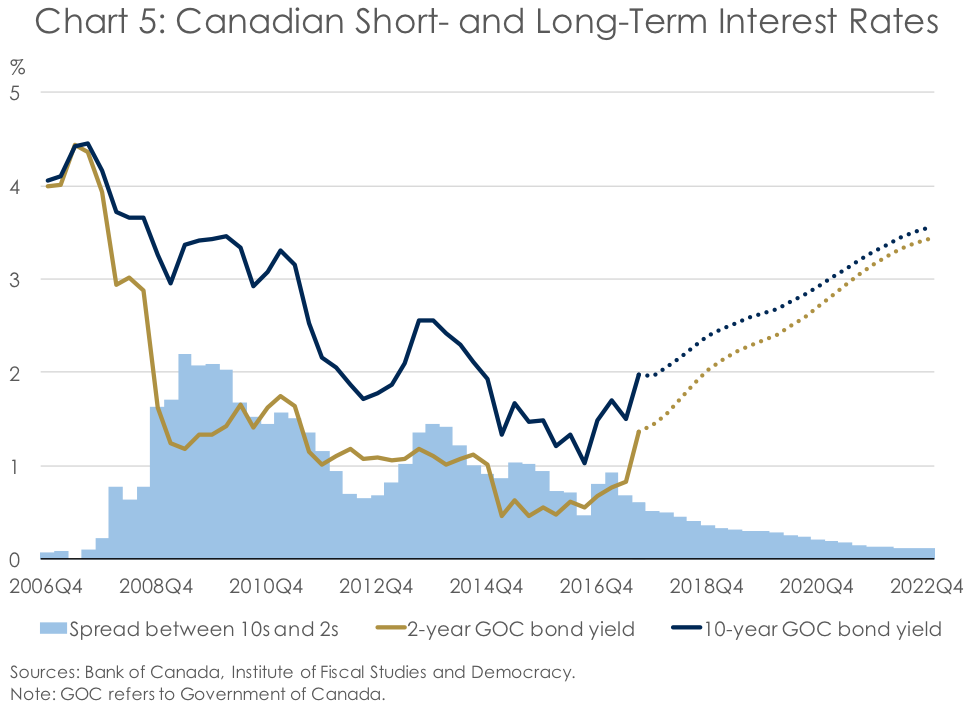 While the cause of relatively low long rates remains a bit of a mystery, explanations that have been proposed including increased demand by institutional investors to match assets with liabilities and also lower inflation expectations. Indeed, the difference in yields on nominal bonds and real return bonds suggests the latter thesis may be making a contribution, albeit a modest one (Chart 6). That said, while bond markets may be skeptical as to the future advance in prices, consumers seem to be resolute that inflation will return to the targets set by North American central banks (Chart 7). 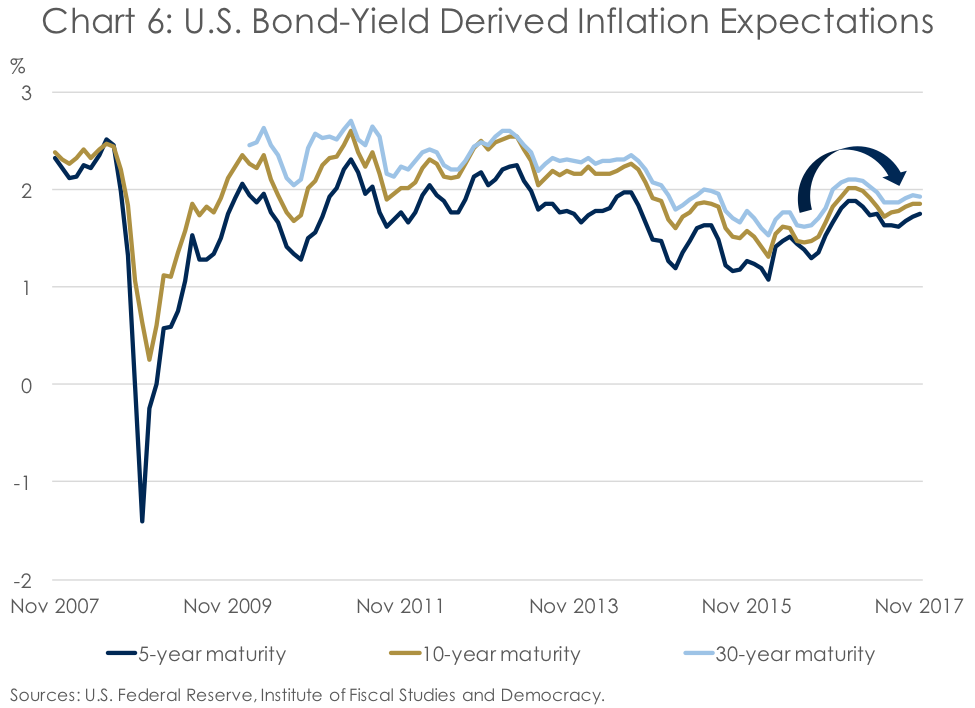 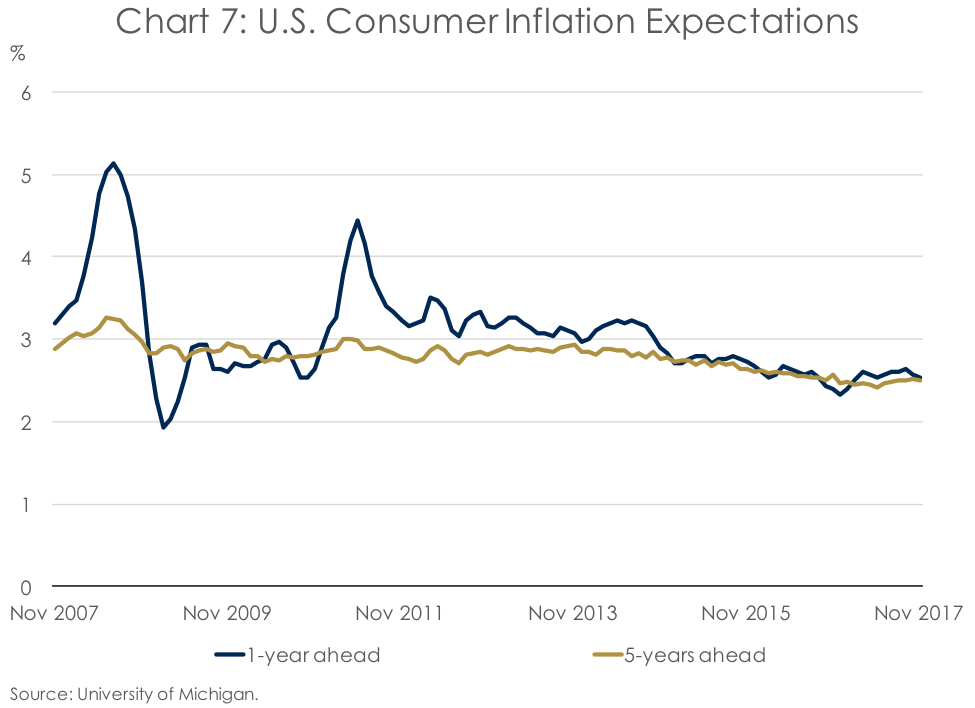 While interest rates remain modest and inflation stays muted, U.S. economic activity seems to be unstoppable. After experiencing growth of 3.3% annualized in the third quarter of 2017, real GDP is expected to advance at a roughly 3.4% annualized pace to close the year, which is the average of the nowcasts published by the Federal Reserve Banks of Atlanta, New York, and St. Louis). Consequently, the IFSD is projecting the real economy to hit a torrid 2.8% pace of growth south of the border in 2018, up from a respectable 2.3% this year (Chart 8). After that, growth is anticipated to slow, but remain in line with its trend at around 2.1%. 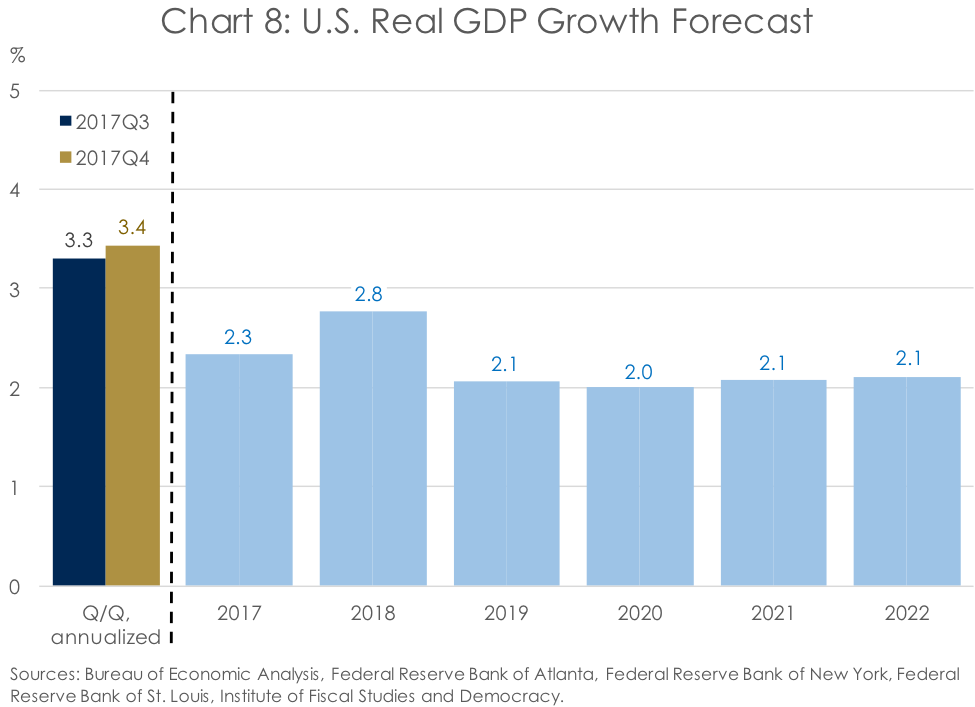 Keep in mind, these solid growth numbers do not take into account some of the storm clouds on the horizon for the U.S. economy, most notably the renegotiation of the North American Free Trade Agreement (NAFTA). Through higher tariffs, in addition to possible new non-tariff barriers to trade, implications for the Canadian and Mexican economies will be significant and negative (on net). Higher costs of, and obstacles to, North American trade could also derail the solid U.S. economic expansion observed in recent quarters, as U.S. businesses and consumers need to pay more for imports of goods and services. Layer on top of that the risks to highly leveraged households in Canada from rising interest rates and tightening housing market regulations, and the downside risks to growth are a going concern in the Great White North.

But, for now, the economic data are generally coming up positively for the Canadian, U.S., and global economies. And leading indicators, such as Purchasing Managers’ Indices (PMIs) suggest this trend is likely to continue for the foreseeable future (Chart 9). This points to continued solid global growth and the closing of output gaps among the world’s largest economies, which should contribute to further labour market tightening, rising wages, and accelerating prices growth (Chart 10). With the global economy seemingly out of its post-recession funk and now hitting escape velocity, cross your fingers that a policy mistake in the good ole US of A doesn’t derail the good times being had by all. 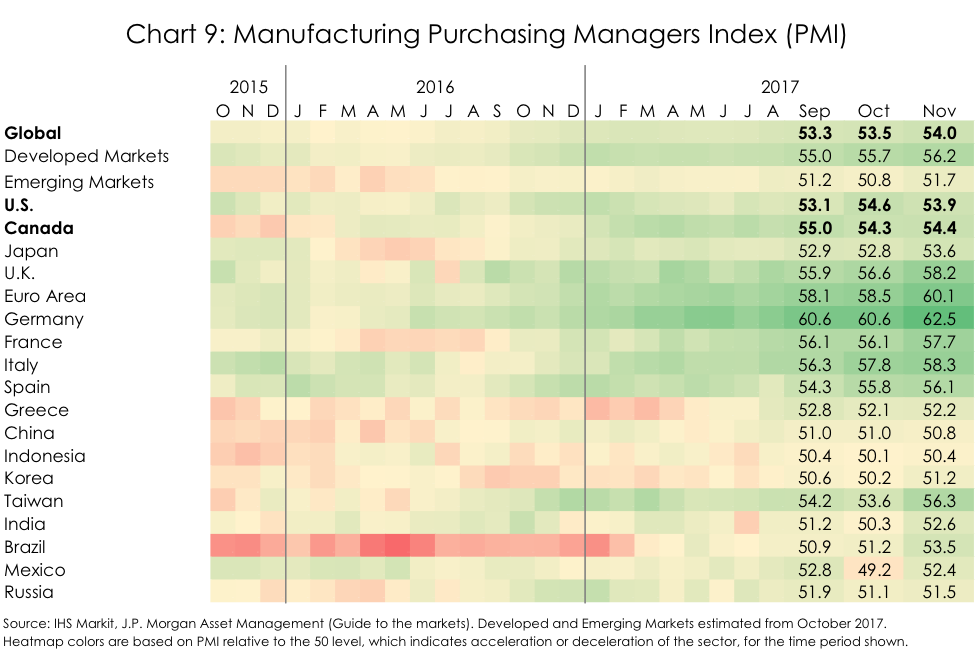 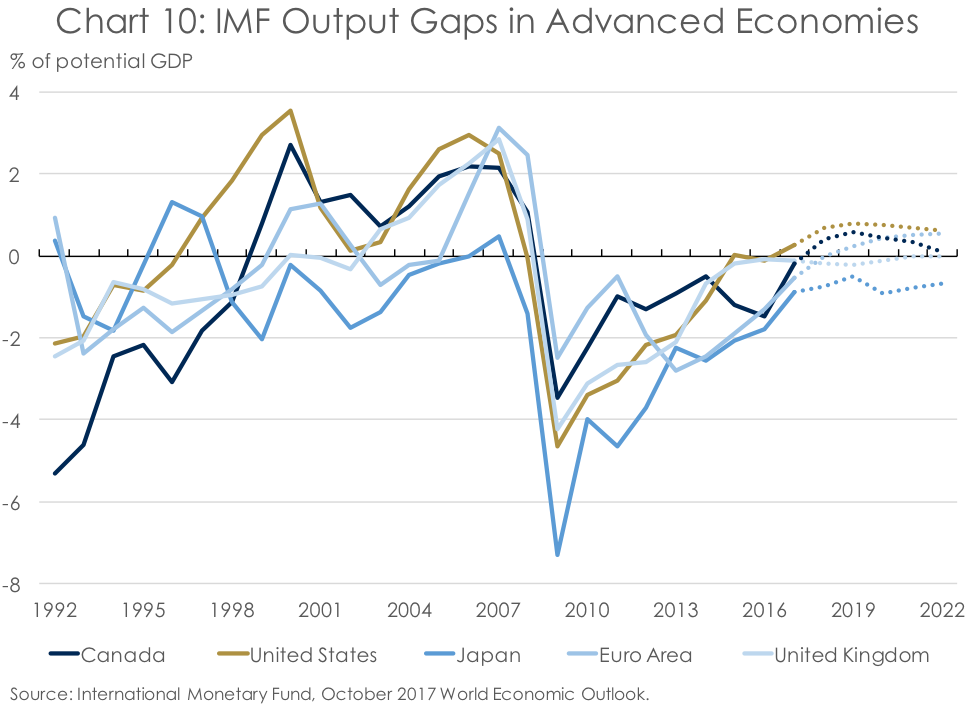 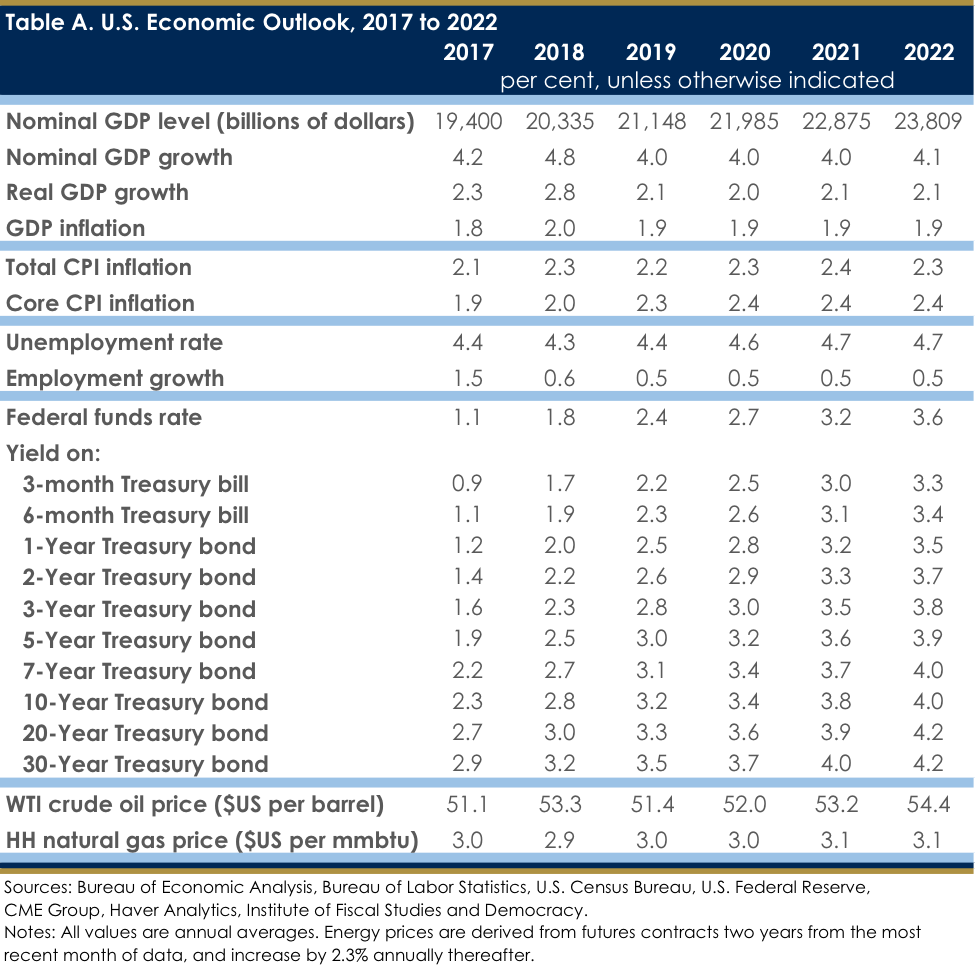 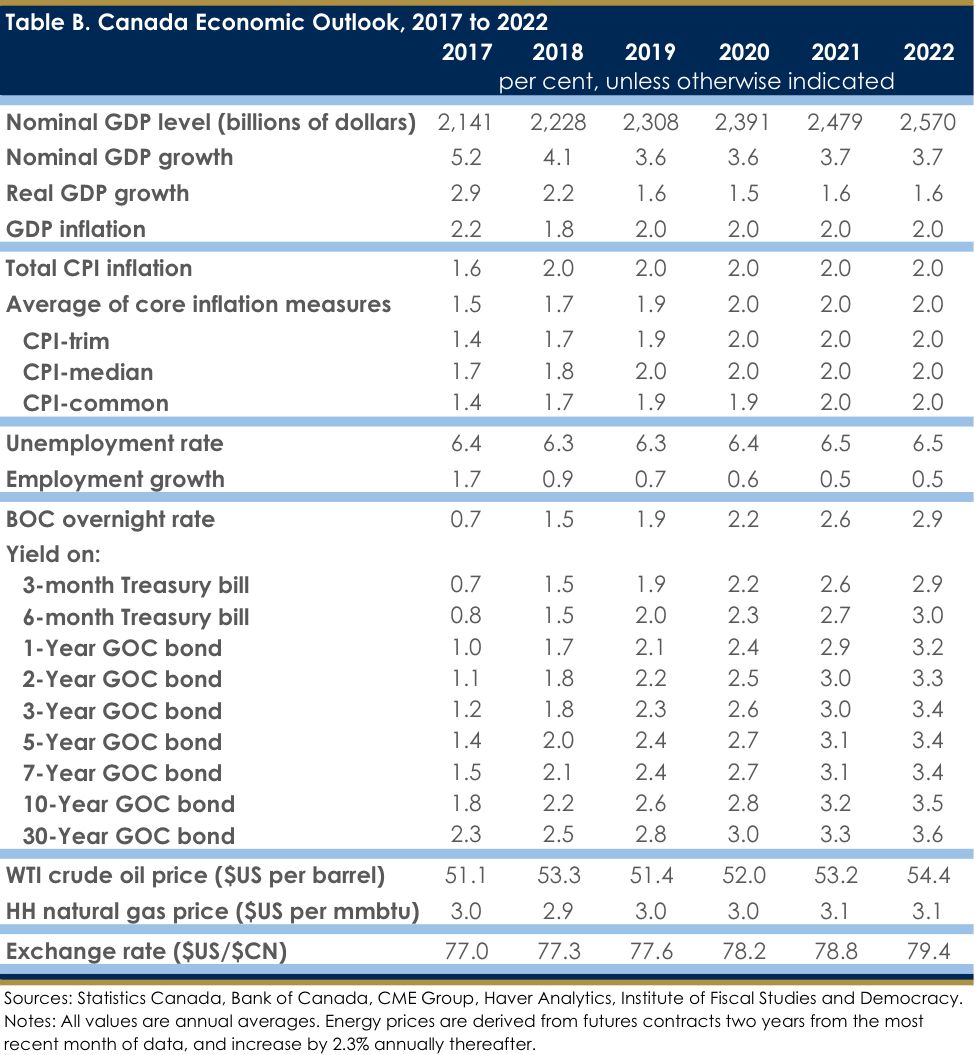