Federal Fiscal Forecast: Just When the Federal Government Thought the Worst Was Over

It’s been an amazing run for the Canadian economy over the past six-odd months. As the Institute of Fiscal Studies and Democracy (IFSD) outlined in its recent Canadian Economic Forecast, real GDP growth this year is expected to well outpace our neighbour to the south by a wide margin. The labour market is rapidly tightening as well. And given Canada turns 150 years old this year, the bumper economy north of the 49th parallel is the icing on the cake of this sesquicentennial year.

However, the party can’t last forever. In recent interviews and speeches, members of the Bank of Canada’s Governing Council have made clear that, after having made sure the punch was thoroughly spiked for some time, it’s soon going to be time to take the punchbowl away. As such, despite inflation having been below target for a while now, interest rates are set to rise, with markets increasingly leaning toward the first hike taking place in July (markets were pricing in a roughly 75% probability of a July 2017 interest hike at the time of writing). Indeed, the IFSD’s recent forecast for the first overnight interest rate hike taking place in January 2018 now seems more than stale.

The Bank of Canada has also repeatedly communicated that it believes the negative economic impact of the sharp decline in oil prices that began in mid-2014 has now run its course. Indeed, the Bank’s forecasts have consistently placed the price of West Texas Intermediate (WTI) – the North American light, sweet crude benchmark – in the US$40/bbl to US$50/bbl range. That’s exactly where they are today, and few commentators see them climbing much higher any time soon.

So, that’s where the Canadian economy currently finds itself – the real economy is on fire, spare capacity in the labour market is rapidly disappearing, and the central bank is preparing to tighten monetary policy despite soft price growth and lackluster oil prices. As a result of the spectacular economic performance recently, some have speculated that the outlook for federal deficits is likely to improve as well. And, indeed, the IFSD is also in this camp (Table 1). It’s the IFSD’s view that federal budget deficits will be smaller over the next few fiscal years than either the IFSD or Finance Canada had predicted back in March 2017 (Chart 1). 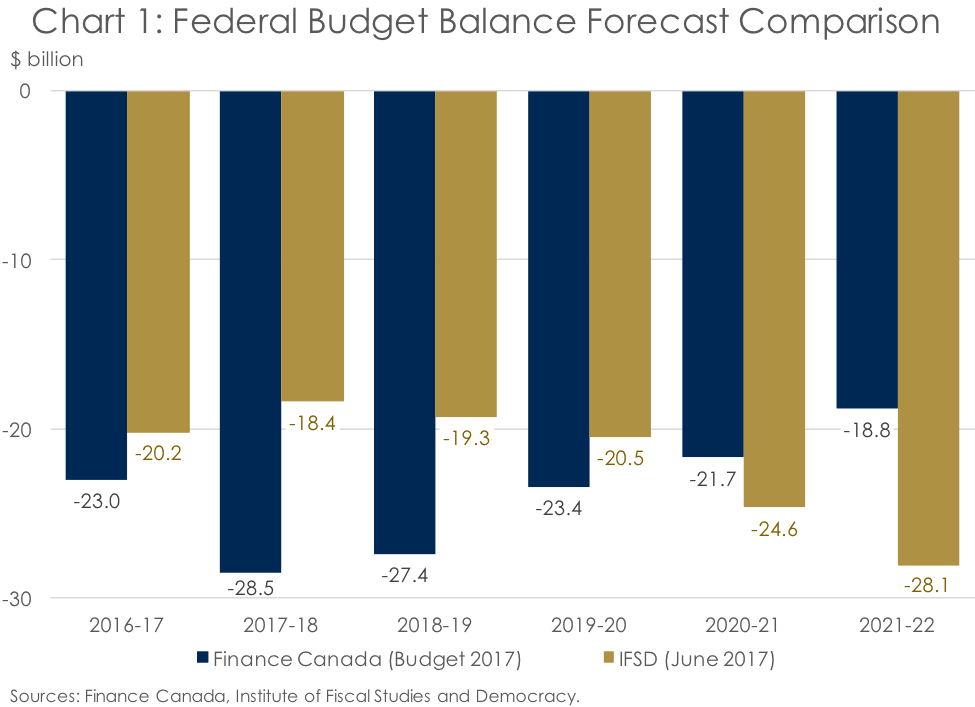 Even better than a rosier fiscal outlook is that the primary reason for the improved budget balance over the next few of years is an upwardly-revised revenue forecast in addition to a lower expense forecast (Chart 2). However, the strength in revenues is not expected to persist, as the pace of corporate income tax (CIT) revenue growth, in particular, slows dramatically (Tables A through C). 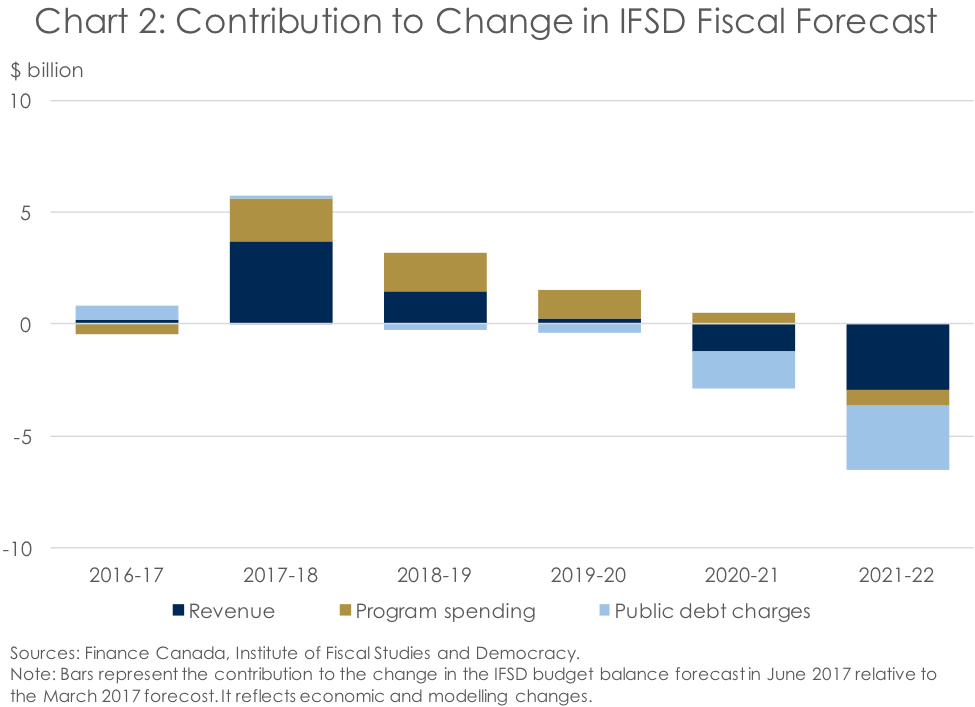 The reason for the weakness in the outlook for CIT revenues can be directly tied to two of the economic factors already mentioned which directly hit corporate profits: tighter monetary policy and flat oil prices. Since financial institutions borrow for shorter periods and lend for longer periods, a relative rise in short-term interest rates (known as a flattening of the yield curve) mean that it becomes more expensive for banks to borrow, thereby squeezing their margins. The recent slowdown in the GTA housing market should further exacerbate this weakness in corporate profits. The other reason for the lower corporate profits forecast – moribund energy prices – hits energy companies’ bottom line. As such, the combination of these factors is expected to weigh on corporate profits growth going forward.

It should be noted that the IFSD’s soft outlook for corporate profits growth is somewhat out of step with that of some other forecasters, and may therefore have some upside. However, most forecasters appear to have corporate profit growth returning to the average observed before the recent collapse in oil prices. Indeed, the rates of CIT revenue growth published in Budget 2017 suggest that Finance Canada’s assumptions are likely similar (they don’t publish their corporate profits forecast). In contrast, the IFSD is skeptical that corporate profit growth will return to its long-run average. This view is both for the reasons already mentioned as well as the fact that the pace of aggregate economic growth is expected to be lower than in the past in Canada and across much of the world.

Bringing all of this analysis together, federal government deficits are expected to rise quickly toward the end of the forecast after showing some improvement over the next few years. This contradicts the work of both Finance Canada and the Parliamentary Budget Officer. The difference appears to reflect the IFSD’s view that revenue growth will be lower and program expense growth higher than is the case for these other forecasters. A more rapid rise in short-term interest rates also makes a significant contribution, pushing public debt charges higher.

Still, it is important to note that, over the long term, the IFSD expects that the federal debt-to-GDP ratio will decline, thereby supporting the view that federal government finances are fiscally sustainable. That said, the forecast for ever-increasing deficits over time suggests that the federal government would be wise to consider committing to a plan to return to more manageable budget balances. Otherwise, the Government of Canada could find itself in a bad spot if the Canadian economy was to come under pressure (from, say, an increase in tariffs resulting from the renegotiation of the North American Free Trade Agreement).